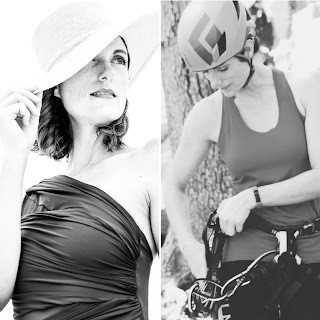 My husband tells me all the time that I'm not funny.  He pats my head in a way that would only be condescending if we weren't married and says, "you're pretty".  And so I am...to him, at least.  But when he isn't around, I have on several occasions, left other people in stitches...

So if I can't be funny, I'll settle for pretty.  And if I'm not as pretty, it's probably because I'm rock climbing.  Still wearing powder, covered in chalk.

September 02, 2019
When I was in college, someone very close to me told me I was boring. I was surprised...and hurt. Maybe because it came out of nowhere, but probably because it just might have been true. Since then, I have amassed quite a few interests and experiences. I was already on my way into the military. Later,I decided to teach myself Arabic because it was unusual and no one would expect it. I deployed to Uzbekistan (a country most people I knew had never heard of nor could they locate). I've flown in an MH-53 Pave Low helicopter, been ziplining over a waterfall, spent 3 weeks in Uganda, fell in love with rock climbing almost 2 years ago now, and a few days ago, I rappelled off a 14 story building - twice. I have never thought of myself as super-adventurous. I never even played sports in high school (I don't count the one season each of track and cross-country). But somehow that one comment catalyzed me to become someone who decides to do those types of things. At the same time,
3 comments
Read more