Why Being Brave Isn't Enough 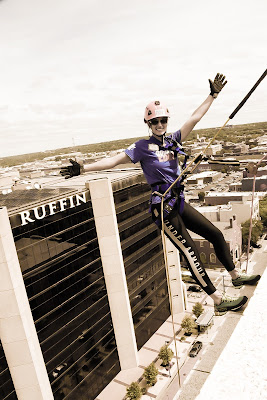 Look at me! Being brave!!

Okay, I'll admit it...I didn't exactly have to summon a whole lot of bravery for this shot.  I was already pretty pumped about going down again and was just super excited to have a photographer around this time.

But there have been plenty of times in my life where I had to be brave.

Starting public school halfway through the year in a new town after being homeschooled for 6 years...  Going to field training as an ROTC cadet where I got yelled at for 6 weeks straight... Facing financial uncertainty after receiving a layoff notice from a previous employer...  Calling our head of Security last week when I almost stepped on a huge spider in women's bathroom at work...

Yes, lots of opportunities for bravery.  The list could go on, but you understand. 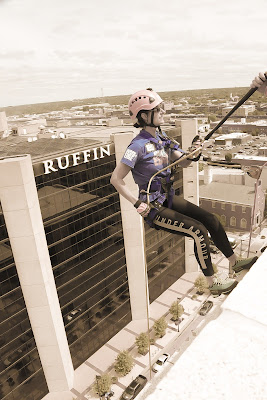 So much is made of bravery.  It's desirable, admirable, and people will go to great lengths sometimes to explain to you the difference between bravery and courage.

It's not enough because you also have to have a good attitude.

As a naturally non-positive person, this comes hard for me.  Ask me about anything and I'm more likely to tell you what went wrong, is wrong, or will go wrong.  Or why it wasn't quite good enough. I even did it with rappelling.

"It wasn't as exciting as rock climbing," I told my friends at the gym later.  At the event, I was having a nice time belaying on the ground and unhooking gear from other participants until that guy came along... another member of the rope crew who was irritating me.  At the sight of him, I no longer cared about congratulating those who had just finished rappelling - I just wanted to get away from that annoying dude.

I was brave alright, but my attitude sucked.

Until I had to help Arthur.  Arthur was probably in his mid-60's and I could tell right away that he was terrified.  Before he tied in, he was looking over the edge whispering to himself - and shaking.  Someone told me later than he had gone through some majorly traumatic events in his life and he was here to conquer his fears.

I helped him get attached to the gear and coaxed him over the parapet wall and onto the ledge.  14 stories up.  But even in his fear (and his bravery), his attitude was tremendous.  He was attentive, trusting, and slowly but doggedly did everything we told him to do to get the rappel going.  He even kept it together when he slipped a little and twisted sideways in a very unnerving fashion.

After he left the ledge and was slowly rappelling down, I got down on my hands and knees (yes, on the EDGE of a 14 story building!) and leaned over into empty space to keep encouraging him.  I was no longer focused on anything but cheering him on.  To be honest, I'm not even sure if it really helped him, but my attitude had turned back to supportive instead of sour.

I cheered for him again when he finally touched down in the ground and was pleased to hear later that day that his whole family had been down there waiting for him.

I was proud of him...and proud of myself for helping him (from the imposing ledge of death), but I was still struck by the truth that my attitude only changed when it was time to help.

It should have been there all along.

Being brave enough to rappel off a building or to hang out on a ledge to assist someone else doing it isn't enough.  A good attitude has to be there - because that is the true reflection of your character. 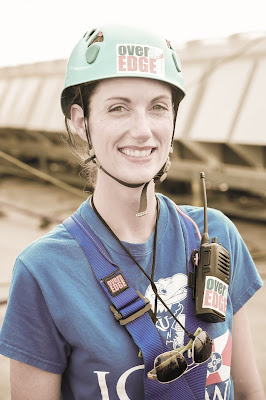 Me, with a better attitude

September 02, 2019
When I was in college, someone very close to me told me I was boring. I was surprised...and hurt. Maybe because it came out of nowhere, but probably because it just might have been true. Since then, I have amassed quite a few interests and experiences. I was already on my way into the military. Later,I decided to teach myself Arabic because it was unusual and no one would expect it. I deployed to Uzbekistan (a country most people I knew had never heard of nor could they locate). I've flown in an MH-53 Pave Low helicopter, been ziplining over a waterfall, spent 3 weeks in Uganda, fell in love with rock climbing almost 2 years ago now, and a few days ago, I rappelled off a 14 story building - twice. I have never thought of myself as super-adventurous. I never even played sports in high school (I don't count the one season each of track and cross-country). But somehow that one comment catalyzed me to become someone who decides to do those types of things. At the same time,
3 comments
Read more